The Midlands Roots Explosion Volume One 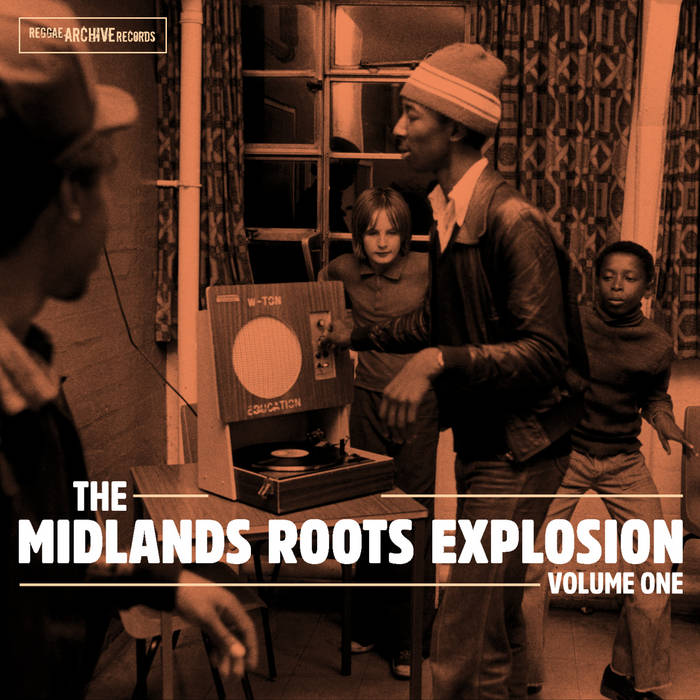 Army Lion I grew up in Handsworth and remember the groups and sound..fabulous stuff.

Talon Sullivan Seriously deadly compilation! Gotta give it a spin from front to back!! Favorite track: Kibudu-Mansatta-Abuku.

Revolt of the Apes

Birmingham may be England's second city but when it comes to reggae music, there are plenty of reasons for it to claim first place. Perhaps no band has done more for British reggae than Steel Pulse whilst Musical Youth, not only found chart success but took reggae to the nation's children in a way no other band could, not forgetting UB40 who also experienced huge international success. These bands didn't exist in isolation, Birmingham and the other towns and cities that make up the Midlands were a powerhouse of British reggae. Finally, it's time to shine the spotlight on some of the lesser known acts that spent years performing and recording without achieving those levels of success.

“The Midlands Roots Explosion Volume One” from Reggae Archive Records, is the first in a series of compilations that hope to showcase some of the unreleased, forgotten and barely known musical gems from what was such a vibrant scene. It's only appropriate that the first volume leads off with the band that put both Handsworth and Birmingham on the musical map, Steel Pulse. We've included the band's first release from 1976, the very scarce “Kibudu – Mansatta - Abuku,” a track that strongly hinted at the heights they would soon reach. As a bonus, we've also included the instrumental version from the original B side; both tracks are making their debut on LP and CD.
For those familiar with Musical Youth's later chart hits, “Political” may come as a surprise, with grown up lead vocals by former member of Jamaican hit makers The Techniques, Frederick Waite Snr., and a hard roots edge to the lyrics. This was the band's first release issued on a small Birmingham label and another track worthy of far wider exposure.
Steel Pulse and Musical Youth found fame beyond reggae and reached the national charts. Wolverhampton's Capital Letters may have only topped the reggae charts but they were a hugely successful live act in Europe introducing tens of thousands to live reggae. For this release we've been digging in the tape vaults and discovered “I Will Never”. Previously unreleased, this recording has a harder roots edge than their Greensleeves releases and is all the better for it as they slow the tempo down with a celebration of their faith in Jah.

The formation of Black Symbol was inspired by fellow Handsworth residents Steel Pulse; here we feature “In The Name of Jah” featuring the band at their spiritual best. We also have a track from Black Symbol spin-off group Oneness, with “Rome,” previously only available on a very hard to find 12”. Black Symbol provided the opportunity for many other Handsworth artists to record their music and this compilation features several: Man From The Hills “Redemption Day”, Sceptre “Ancestors Calling”, Benjamin Zephaniah “Unite Handsworth”, Zephaniah “Free Man” and the fantastic and previously
unreleased “Instruments” from Mystic Foundation. Why “Instruments” had laid forgotten on the master tape for thirty years, is unknown but it more than earns it's place on this album as a stand out track. More tracks from Black Symbol and the Handsworth bands can be found on our previous releases; “Black Symbol”, Sceptre's “Essence Of Redemption Ina Dif'rent Styley” and the two volumes of “Black Symbol Present Handsworth Explosion”. Handsworth's last but by no means least contribution is from Carnastoan with “Mr. Workhard,” the B side of the band's classic 12” single.

Birmingham's contribution is rounded up by Iganda, a band whose long career sadly only produced one 7” single released in 1979; fortunately it was a classic and here we have the A side “Slow Down” The Midlands are further represented by Leicester's Groundation and the nearly 8 minute long monster of a track that is “Fa-Ward”. We've previously reissued this on 12” and hopefully, there are more recordings to come from the Groundation tape vaults.

“The Midlands Roots Explosion Volume One” is just a snapshot of the abundance of musical talent in the region during the 1970s and 1980s. It barely scratches the surface but even so, it's one of the strongest reggae compilations available and shows that the English Midlands were second to none when it came to roots reggae.

With sleeve notes from Jim Weir who was a musician involved in the Birmingham reggae scene, the album will be released on 29TH June 2015 available on high quality double vinyl in a deluxe gatefold sleeve, on CD and as a digital download.

This record is dedicated to Fatman (Black Symbol) without his help this record would not have happened. Blessed Love