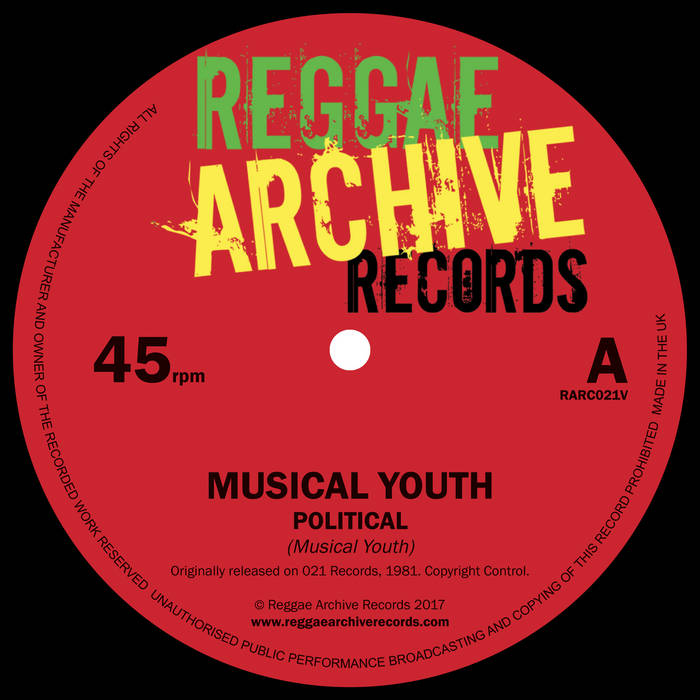 One of the joys of compiling records is to expose lesser known tracks to a wider audience. In the case of Musical Youth by including both sides of their first single on our “Midlands Roots Explosion” series, we also had the effect of overturning many people’s preconceptions.

Musical Youth burst into the public consciousness in 1982 with “Pass the Dutchie”. It became a well deserved stepping stone to huge success as the major label pop friendly marketing tool kicked into full effect. The band's first single, featuring former Techniques member Frederick Waite Senior on lead vocals, didn't fit the picture and became an all but forgotten part of their story.

That single, “Political” / “Generals” was a fund raising effort for a community music facility and was released on Birmingham's independent 021 label in the early years of Thatcherism and at a time of high unemployment. “Political” was a scathing attack on the inability of the government to provide millions of people with employment. A cry for both work and a better future where the children will be given a chance to have jobs and security; it ably reflects the desperation and despair that so many felt at that time.

Almost as much a part of the 1981 political landscape was The Cold War and fear of nuclear Armageddon. “Generals” touches on its anti-war call for pacifism, naming and shaming the officers rather than the ordinary soldiers who ultimately pay the price for wars.

Both sides have an unmistakeably British roots reggae sound, a sound that for many years was underappreciated by both critics and fans alike who saw anything non Jamaican as second class. Finally the gems of non Jamaican reggae are being objectively heard and given the status they deserve, so what better time to re-release a great double header and make it available beyond those who buy only CDs and LPs.