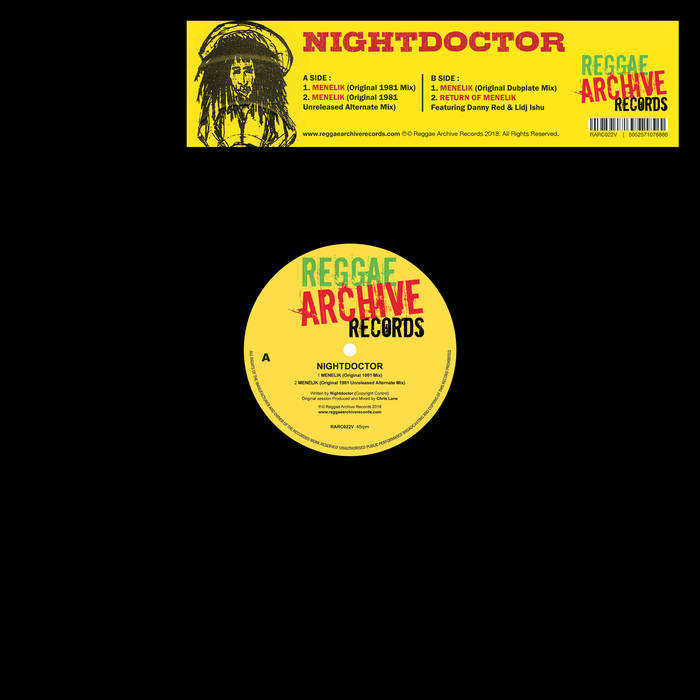 Nightdoctor's instrumental “Menelik” is a track that was originally recorded almost as an afterthought but in the years since, has become recognised as a sound system classic. Its re-release is long overdue and as a bonus we've included an unreleased alternative mix from Chris Lane, an early dubplate only mix and “Return of Menelik” Nick Manasseh's later updated take on the track.

By the spring of 1981 Nightdoctor had built their reputation as a brilliant live band and tried their hand at releasing singles without much success at capturing their live sound. It was during a gig in London's 100 Club, that manager Martin Poole was approached by leading reggae journalist Penny Reel, discussing capturing the band's live vibes. Penny suggested they should work with Chris Lane who had recently started Fashion Records and offered to make the introductions.

The meeting with Chris went well and it was decided that the band should record a lovers rock tune as that style was doing particularly well at the time. The band set about writing what was to become original A side “Romancin'” and Chris suggested a militant instrumental would be a good choice for the B side and that's how “Menelik” came to be chosen.

With some financial backing from The Specials drummer John “Brad” Bradbury and help from The Specials manager Rick Rogers, the band set up a brand-new label Race Records to handle this and similar releases. Chris booked the recording session at Vineyard Studios in Highbury with the band laying the two tracks down in one day, “Menelik” being recorded live in five takes. Chris then spent another day mixing the songs. The musicians for the recording session were: George Young on drums, Roger Haires on bass, Charlie Wood on guitar, Freddie Cruickshank on guitar and vocals, Caroline Williams on keyboards and vocals, Vin Gordon on Trombone, Al Deval on Tenor Sax, Dick Maun on alto sax, Robbie Coombes on vocals and Lynford Joshua on percussion and toasting.

On release, A side “Romancin'” did well for an independent reggae release receiving plenty of airplay especially from David Rodigan and Kid Jensen on Capital Radio and Tony Williams on Radio London. Meanwhile the B side started to find its own following in dancehalls being taken up by Jah Shaka and becoming a sound system staple. Nearly forty years after its release copies of the original 12” are highly sought after and can fetch over £100. This four-track release not only makes the original version of “Menelik” available at a reasonable price, but also includes two sound system friendly unreleased mixes and as an extra bonus Nick Manasseh's 1989 update “Return of Menelik” featuring Danny Red and Lidj Ishu.