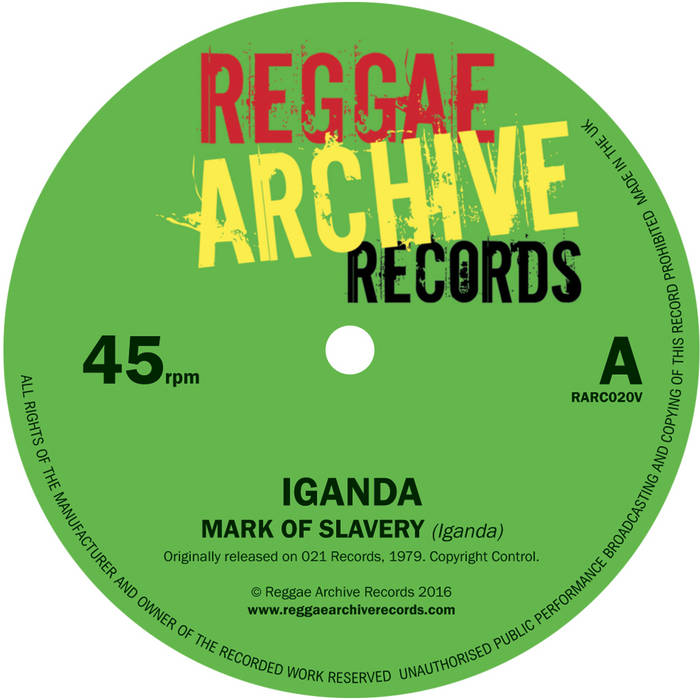 Caleb Bratcher Whenever I play this in the car someone always inquires about it. A sign of a good song in my book! Favorite track: Mark of Slavery.

It's fair to say that the inclusion of Iganda's sole 7” single “Mark of Slavery” / “Slow Down” spread across the first two volumes of our “Midlands Roots Explosion” series, has not only greatly raised the profile of the band, but also sent the price of the original release through the roof. At its heart, reggae is a singles based music and although we've made the two tracks available on vinyl, CD and digital download, there are many reggae lovers who would like “Mark of Slavery” and “Slow Down” available again on the original format.

The good news is that where possible, we at Reggae Archive Records like to respond in a positive way to our loyal customers and requests for reissues, so we are doing a limited run (second pressing on Green Vinyl) of 500 7” copies of “Mark Of Slavery” / “Slow Down” in their original mixes. For the first time in more than three decades, this obscure double sided roots gem from the golden age of the Midlands reggae scene will be available brand new and at an affordable price.

Originally released on 16th September 2016 by Reggae Archive Records and available from good retailers worldwide as well as direct from reggaearchiverecords.com, the second pressing on Green Vinyl (500) copies are sure to sell out so don't delay your purchase for too long.