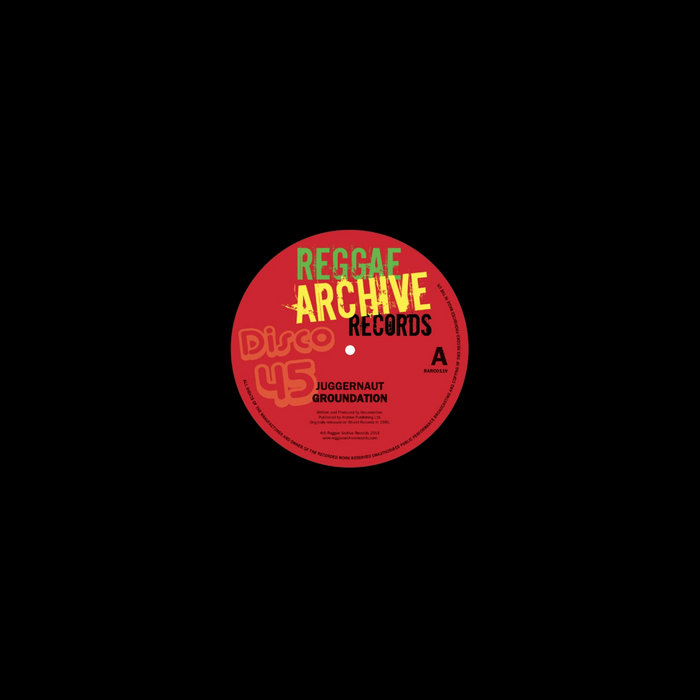 Leicester in the English Midlands may not be known as a hotbed of Reggae but from 1977-1983 it was home to Groundation, an excellent band in the best tradition of UK roots reggae, who built their reputation and honed their skills playing live on the Uni circuit alongside the best of their peers. Unfortunately although they recorded several tracks, did a session for John Peel and appeared on television, they only released one record, a two track 12” single in 1981 on their own Shield Records label, (not to be confused with the Birmingham label of the same name).
The two tracks “Juggernaut” and “Fa Ward” have gone on to be underground classics, highly prized and highly priced collector’s items with the band's name and story becoming lost over time and only known by those old enough to remember their shows or lucky enough to have a precious original copy of that record.
“Juggernaut” is a heavy spiritual instrumental of the sort guaranteed to get sound system play and beloved of Jah Shaka fans. At just short of 8 minutes long, “Fa Ward” is an uplifting and inspiring vocal that leads into a heavy dub cut. This record is a double A sided release in the proper sense, two classic slices of the UK scene at its peak. Quite simply, this is one of the best Reggae singles ever recorded in the UK, a genuine classic and a record more than worthy of a second chance at success.
The quality of the music is such that in 2013, Basque Dub Foundation were inspired to cut their own version of “Juggernaut” and release four dub cuts on 12” a release perfectly complimented by the original and best piece.
How many of the original 1,000 copies survive is hard to say but those that do are highly prized and rarely sold, regularly reaching three figure sums when they do appear. Sharing lost classics is what Reggae Archive Records are all about and so we tracked Tanni down and licensed “Juggernaut” and “Fa Ward” for a lovingly restored vinyl reissue that puts this great music within reach of everyone.
Following the breakup of the band in 1983, vocalist Tanni, (pronounced the same as the British loudspeaker company) became a solo artist, signing a deal with Greensleeves Records and releasing singles on their UK Bubblers offshoot as Tannoi. Now back as Tanni Browne, he is writing and recording new material and working on an album.
The limited edition vinyl reissue of “Juggernaut” and “Fa Ward” will be released by Reggae archive Records on 17th February 2014 and available at a regular retail price from all good retailers, as the song says, let's take the music fa ward!
www.reggaearchiverecords.com