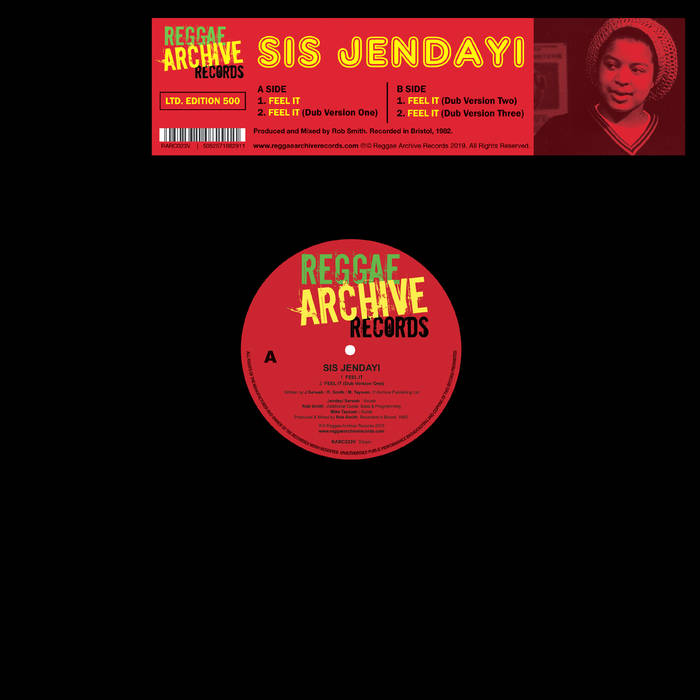 ecowisdom Have to have this on vinyl - love riddim - love vocal - feel good tune!

Some years ago, whilst compiling our Bristol Reggae Explosion series, I was approached by Mike Taysum who told me of a great unreleased reggae track which he'd played guitar on back in 1982. Unfortunately, he'd lost his cassette copy of the song long ago and at that time, Rob Smith who also played on and produced the track had no idea as to the whereabouts of the masters. Used to searching for missing tapes, we eventually managed to source a low-quality transfer of the recording from vocalist Sis Jendayi. The track was great but without the master we couldn't include it on any of our previous Bristol focussed releases.

Earlier this year Rob Smith happened to mention that he'd been transferring his old recordings and had come across the masters for “Feel It”. Without hesitation I suggested we release the song a mere 37 years after it was recorded, with the added bonus of three original dub mixes he'd also found on the tapes.

The recordings originate from a session one afternoon in late 1982 when three members of Bristol's Arts Opportunity Theatre set about recording a track they'd written. With just three people and limited equipment, they made a strength of their limitations and in doing so came up with something unique for the time. In many ways “Feel It” pre-empts the small studio, no budget DIY approach that from the late eighties which would see a UK led roots reggae revival spread as an antidote to the direction Jamaican dancehall reggae was then travelling, further and further away from the seventies roots sound.

Whilst the low budget home studio approach looks to the future and the early drum machine beats place it firmly in 1982 the lyrics are classic roots reggae that could have been written at any stage in the music's history. Referencing slavery and making clear those responsible are the ones who will feel it with punishment in the afterlife. The real icing on the cake is that this is that rarest of offerings a female roots vocal ably handled by future Restriction vocalist Sis Jendayi.

In addition to the vocal there are three dub mixes perhaps the earliest available examples of Rob Smith productions. These recordings may be seen as the start of Rob's illustrious career which includes Smith & Mighty, Three Stripe, More Rockers and RSD. The dub mixes in particular with their sparse instrumentation and use of a drum machine's programmed beats foreshadow the UK digi dub scene pioneered by artists such as Nick Manasseh and The Disciples as well as labels including Conscious Sounds and Riz.

Although Sis Jendayi and Rob Smith would soon work together as members of Restriction contributing the talents heard on “Feel It”, this was to be a very different sort of project - a large reggae band in the traditional sense. On the other hand, “Feel It” remains a glimpse at an alternative path, one that if pursued or perhaps even given a contemporary release, might have seen the West Country getting a head start in shaping the future sound of British reggae. It may have taken 37 years, but good music is timeless and it's never too late to share it.

“Feel It” by Sis Jendayi is released via Reggae Archive Records as a strictly limited edition 10” Vinyl 500 copies only featuring the vocal mix accompanied by three dub mixes.